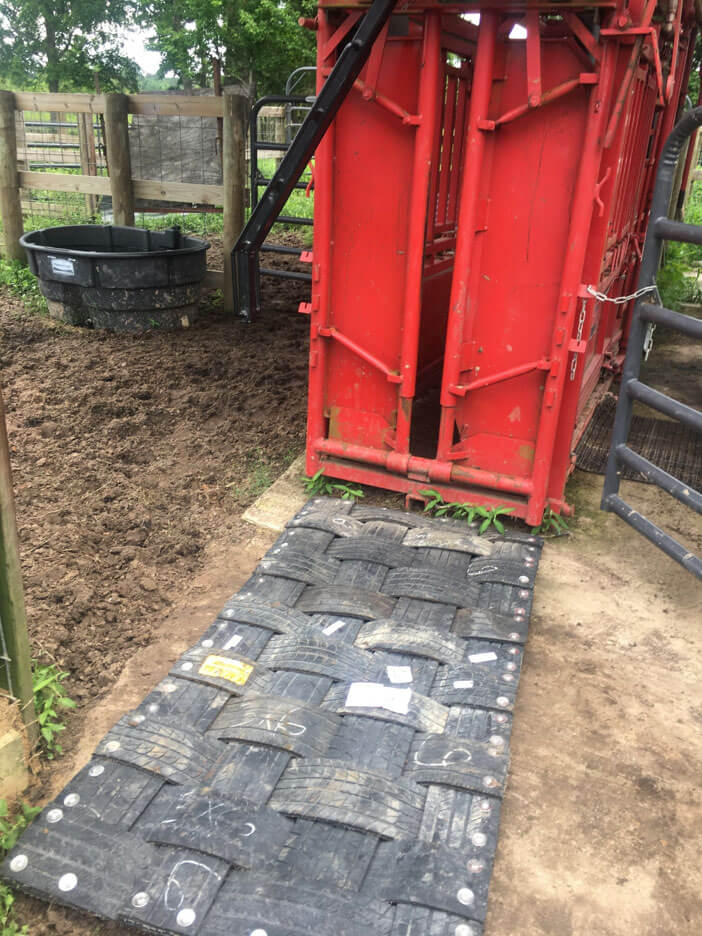 I raise Beefmaster cattle, and I often use other cattle breeds as recipient cows.  Even though Beefmaster cattle are by nature a gentle breed, there are occasions when an animal will be shall we say “excited” to join the herd and tell them about what they experienced in the cattle chute.  It is during these times that I was concerned about the somewhat slippery surface of the bare concrete at the exit gate of my cattle chute.   Although the concrete has grooves in it to facilitate water and waste runoff, these grooves always became filled and  added to the risk of the animal falling down.

While on Facebook I received an advertisement from D Mat Company.  D Mat Company repurposes old tires by cutting them, flattening them and bonding them together to make a highly durable mat designed to reduce the risk of cattle slipping on slick surfaces.   I recalled seeing an example of the effectiveness of these mats while having cattle artificial inseminated at McNeese University in Lake Charles, La.  The Facebook ad offered the mat for not only a reasonable price, but free shipping, so I “took the chance “of purchasing something from an unknown vendor off of the internet.

Within a couple of days the mat arrived at my office via Federal Express.  All of the old tires were woven in place and bolted together using stainless steel bolts rather than bolts that would rust much more quickly under the harsh environment in which the mat will be used.  When I attempted to pick up the mat to carry it to my truck, I was taken back by the overall weight and durability of the product.  Either because I’m becoming an old man or because of the weight and quality of construction, I drug the mat to my truck and hauled it to the farm.

Installation was as simple as cutting the packing straps and laying the mat in the desired location.  It wasn’t attached to the concrete in any fashion, it just laid on top of the slick concrete.  Having several head of cattle to work that day, I was wanting to see if the mat would perform as advertised.  While working cattle, I was disappointed because the first four cows gingerly walked out of the chute after being worked.  No matter the frame size or body weight of the cows, the mat held firm and did not slip at all. Yet in my mind this was not really a test.  These cows were so gentle that they would not have slipped on the bare concrete either.   Pleased with the mat performance for the first four cows, I was still anxious to see how it would perform when being “tested” by a large frame, heavy weight, aggressive cow.

I guess the term is “fortunately”, because  cow number five was that cow.  Large frame, snorty, and apparently as anxious to test the mat as I was, she had her eyes on the green light when the chute headgate opened.  She sprang out of the chute and hit the center of the mat with all four feet at once.  Using the mat as leverage, she sprang again off of the mat with all four feet and landed in the holding pen.   The mat didn’t budge at all.  I was not only pleased but impressed.  The D Mat Company mat performed as represented for the remainder of the day and every subsequent day since.  Even when the mat became dirty with all the “excrement” associated with cows, the mat has held up wonderfully. I’m very pleased with my choice.