Melody, also known as ear tag number 4-21, to a “hard-core cowman”, is a heifer born February 22, 2021.  She came into this world weighing 106 lbs.  Above the average birth weight for a purebred Beefmaster.  She was the third animal that arrived in a 3-N-1 package purchase.  3-N-1 means I purchased her mother (Dam) with a calf by her side while her mother was already bred by a bull and palpated pregnant.  Melody was that offspring.  As you can see in the photo Melody is primarily red in color with a slight amount of white on her underline.  Melody’s mother, ear tag #408 can be seen in the background watching over her. 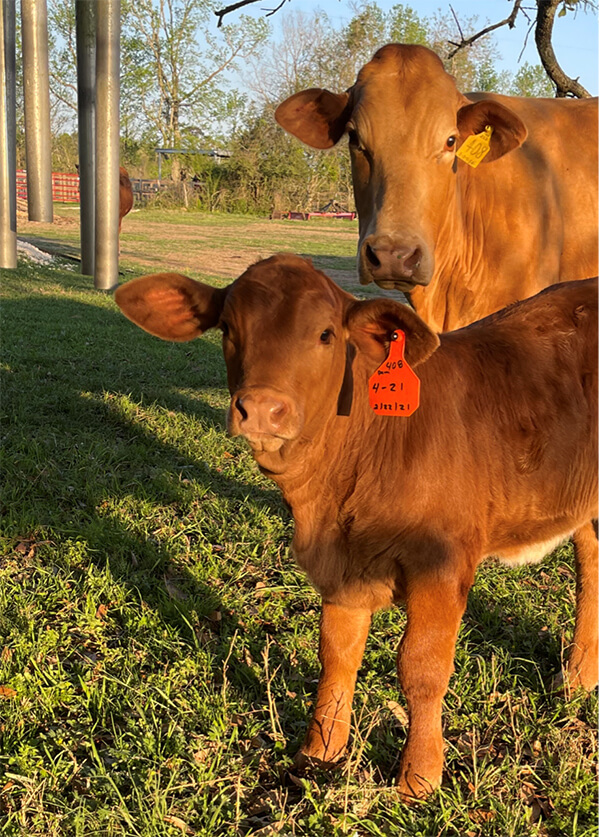 “Hard-core cowmen” say you shouldn’t name your cows because naming them will bias your decision-making ability when determining whether to cull the animal from the herd or whether to keep the animal in the herd.  Yet, every ranch I’ve been on has at least one animal with a name in addition to a tag number.

Sometimes kids will assign a name to the animal at birth or shortly thereafter.  Sometimes if the animal is expected to be a top producer, a name will be assigned for marketing purposes.  Names such as King George, Bet on Bubba, something that will bring instant recognition and association.  More often the names given to cows are somewhat unflattering such as “Crazy Eye, High Headed, Fence Jumper, Bruiser, Kicker, Bitter, etc.”  And even more often many animals are given names when they are being worked or handled.  Difficult animals are often assigned names that shouldn’t be used in the presence of a lady.

In our operation not all animals get names.  The ones that do typically have done something that singles them out and helps get them labeled with a name.  Such is the case with Melody.

If you notice in the picture Melody is looking at a wind chime hanging on a limb of an old oak tree.  Cows are naturally curious and Melody is no exception.  While exploring her pasture one morning the shiny metal caught her attention.  True to form, she licked one of the chime pipes and it bumped another one making a noise.  Apparently it fascinated her.  She began to bump the chime with her nose creating much louder and many more sounds.  She played with the wind chime for a while then moved on.  Occasionally she will return to visit the chimes and reaffirm her namesake, Melody.